Lemmy is a self-hosted social link aggregation and discussion platform. It is completely free and open, and not controlled by any company. This means that there is no advertising, tracking, or secret algorithms. Content is organized into communities, so it is easy to subscribe to topics that you are interested in, and ignore others. Voting is used to bring the most interesting items to the top.

Customizing Lemmy is now much easier than before. Instance admins can select a default instance theme under /admin which applies to all users who are not logged in, and those who haven’t explicitly picked a theme.

It is also possible now to add custom themes to an instance, without having to recompile lemmy-ui. When running with Docker, make sure that these lines are present in docker-compose.yml (Ansible will add them automatically if you updated the repo). Then put your .css file into ./volumes/lemmy-ui/extra_themes. The new theme can then be selected by users, or set as instance default.

For native installation (without Docker), themes are loaded by lemmy-ui from ./extra_themes folder. A different path can be specified with LEMMY_UI_EXTRA_THEMES_FOLDER environment variable.

For instructions how to create a new theme, have a look at the documentation.

@nutomic made many changes to federation to increase compatibility with other software. Lemmy can now receive deletions from [Pleroma], comments from [Friendica] and communities from lotide. Other actions were already compatible before. Mastodon can now display communities even when a user with identical name exists (but the user can’t be viewed in that case). There were no breaking changes necessary, so federation is fully compatible with 0.15. If you notice something in another project that doesn’t federate but should, please open an issue.

Multiple users have pointed out that posts, comments and votes don’t federate reliably. We first attempted to fix this in Lemmy 0.15.4 a few days ago, but that didn’t help much. Later @nutomic noticed that Lemmy was only sending out activities with 4 worker threads, which is not enough for a big instance like lemmy.ml. At the same time, many of those workers were taken up by sending to broken instances, trying to connect for a minute or more. This version adds a timeout and increases the number of workers.

@dayinjing implemented a funcionality for instance admins to hide controversial communities. A hidden community is only visible to those users who subscribe to it. This represents a milder alternative to removing a community. This functionality is not implemented in lemmy-ui yet, but admins can hide a community like this via command line:

To help adoption, and since most people use social media through their smartphones nowadays, @dessalines has been working on a native android app for Lemmy called Jerboa, which is now on F-Droid and Google Play.

It is still at an alpha level, but is very usable. We’d love to have experienced android developers contribute to it.

This now makes three smartphone apps for Lemmy: Lemmur and Jerboa for Android, and Remmel for iOS.

There are three lemmy.hjson config changes. See defaults.hjson for comments and default values.

We (@dessalines and @nutomic) have been working full-time on Lemmy for almost two years. This is largely thanks to support from NLnet foundation. If you would like to support our efforts, please consider donating.

If you’d like to support development, and make sure that we will always be available to work full time on Lemmy, consider donating to support its development. We’ve spent hundreds of hours on Lemmy, and would like to be able to add more developers to our little open-source co-op as time goes on.

Btw upvoted not showing on feddit.de seems to be resolved with this update! Finally, after a couple of weeks it works again :)

Got this freeze after tapping “add”

Is that lemmur? What software is that?

Did you open up an issue on that git repo? We have nothing to do with that.

Okay, will do, thanks.

Yet another great update!

Wow, a big list of nice improvements. Congratulations @dessalines@lemmy.ml, @nutomic@lemmy.ml and other contributors. Thanks for your great work.

I have added Remmel to the curated list of delightful fediverse clients, from where it will be published in the Delightful Club hosted by @yarmo@lemmy.ml.

Amazing work!!! It’s great watching this community and the project grow. And at least for browsing, Jerboa seems like a great app!

Thanks for the great work ♥

Amazing! love the default_theme and that adding themes is so easy now.

How does Jerboa compare to lemmur?

This is great. Just installed the new android app, it’s way better than lemmur. will be around now, thanks for your work!

Thx! Its still alpha-level and I don’t have too much time to contribute to it, but I’m glad you’re liking it so far!

yeah, there are certainly some rough edges, but nothing too terrible. if i had the expertise I’d gladly contribute but android is a beast of an ecosystem to learn

You can also read the announcement on join-lemmy.org. This is especially good for sharing with other people.

I also updated this posts url to that one.

Thanks for the hide community shout out! I’ll try to get around to doing ui changes if no one else does it. Busy till later this month.

This is probably not the place to say this, but every time I click on saved messages of any user, I see my saved posts and comments instead. Is this a bug in lemmy? I couldn’t find any issues on github related to this.

Hrm… could you open a bug for that in lemmy-ui? I should be hiding that button on profiles that aren’t your own. You can’t see saved posts for other users.

Are there plans to support BAT for donations, I already asked in chat but got no answer. I would like to use BAT because the system is trusted, and I can contribute monthly very easily trough my Browser.

Right now the domain is not verified, so I am asking in the hope to see more people auto-contributing. 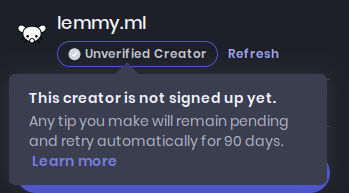 THX for your answer.

There are thousands of cryptos and we can’t support them all. We accept liberapay, opencollective, patreon, bitcoin, ethereum, monero, and cardano, so 7 ways to donate.

I can vouch for liberapay, it’s a great site!

Please keep BAT out. This is not virtue signalling, but Brave is a very shady company. The above cryptos have no such issue.

Other than that, this is reserved for admin use only.